As an Independent Agent this is what we can offer

We are celebrating 100 Years of serving our community! 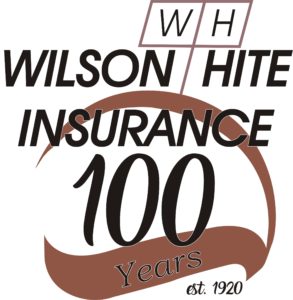 We appreciate you, our loyal customers, who have supported us through the years.

Want to talk? Let us know.

We have offered continuous quality service in Vinton and the local area since 1920.

Wilson- Hite Insurance, Inc., as it is known today, is comprised of many agencies acquired through purchase and merger over many years. In 1920, James N. Wilson, a prominent Vinton businessman, owned and operated the Wilson Insurance Agency. In 1934 his son, James L Wilson, joined the firm and it became known as the Wilson & Wilson Agency. During the ensuing fifteen years several agencies were purchased by the Wilson & Wilson Agency to include the W.E. Bickel Agency, formerly known as Marietta & Bickel. In 1949 the agency became the Jim Wilson Agency. In 1970 the Jim Wilson Agency and the Rector Insurance Agency merged. This merger brought about the purchase of the Vandeventer Agency, Garrison, and also the Paul Shain Agency, Vinton, Iowa. Jim Wilson and Harry Rector remained partners until January 1, 1973 when David C. Hite purchased the Rector interest. In September 1974 the agency became known as Wilson-Hite Insurance, Inc. Don C. Weideman purchased the interest of Jim Wilson effective January 1, 1979. During the years 1979 through 1985 Wilson-Hite Insurance, Inc. purchased the Arthur Schmidt Agency, Vinton, the Hartz Insurance Agency, Newhall, and the Hadley Insurance Agency, Mt. Auburn, Iowa. John Yundt purchased the interest of David C. Hite effective January 1, 1998. Charlie Garwood purchased the interest of Don Weideman effective January 1, 2012.

We are here to help!

We are here to help!

President ~ Agent
I joined Wilson-Hite Insurance in 1998 as Vice-President, in 2012 became President. I am a University of Iowa graduate and licensed in multiple lines of insurance. I look forward to building relationships and helping people find common sense solutions to their insurance needs.

Vice President ~ Agent
I joined Wilson-Hite Ins. in 2002. I am proud of Wilson-Hite’s history and commitment to the residents of Benton County. In my spare time I enjoy spending time with my wife Connie and son Cole. We like all outdoor activities such as boating, hunting, fishing, golfing or snowmobiling. I was a member of the US Air Force from 86-90 and am a member of many organizations in Vinton. Please feel free to contact me with all your insurance needs.

Office Manager ~ Agent
I joined Wilson-Hite Insurance Sept.1991 and have over 25 years of insurance experience. I am a licensed personal lines, commercial lines and crop/hail agent. I work with home, auto and recreational vehicle policies on the personal side and service commercial lines and farm policies. I also work with our agency’s crop hail and multi-peril crop insurance. I enjoy outdoor activities such as camping, canoeing and skiing. I also love to scrapbook and sew. However, my favorite pastime is spending time with my family.

Agent
I have been at Wilson Hite since 2009. I specialize in life and health, Long Term Care, as well as selling personal and commercial lines. I try to communicate the insurance language so you have a better understanding of what your coverages are. I graduated from UNI in 2002 with a Communications Degree. I have the CPIA and CISR designation. I am active in the community and co-founder of Just US. I have a husband, Kevin and two daughters who keep me busy. In my spare time I enjoy spending time in my flowers and reading.

Agent
I joined Wilson-Hite in 2014. I take great pride in helping people protect what matters most to them and developing a personal relationship to best understand their insurance needs. I am licensed in personal, commercial, crop, life and health lines of insurance. In my free time I enjoy spending time with my family, my wife Molly and our two children. I also enjoy farming and volunteering in my community in a variety of ways.